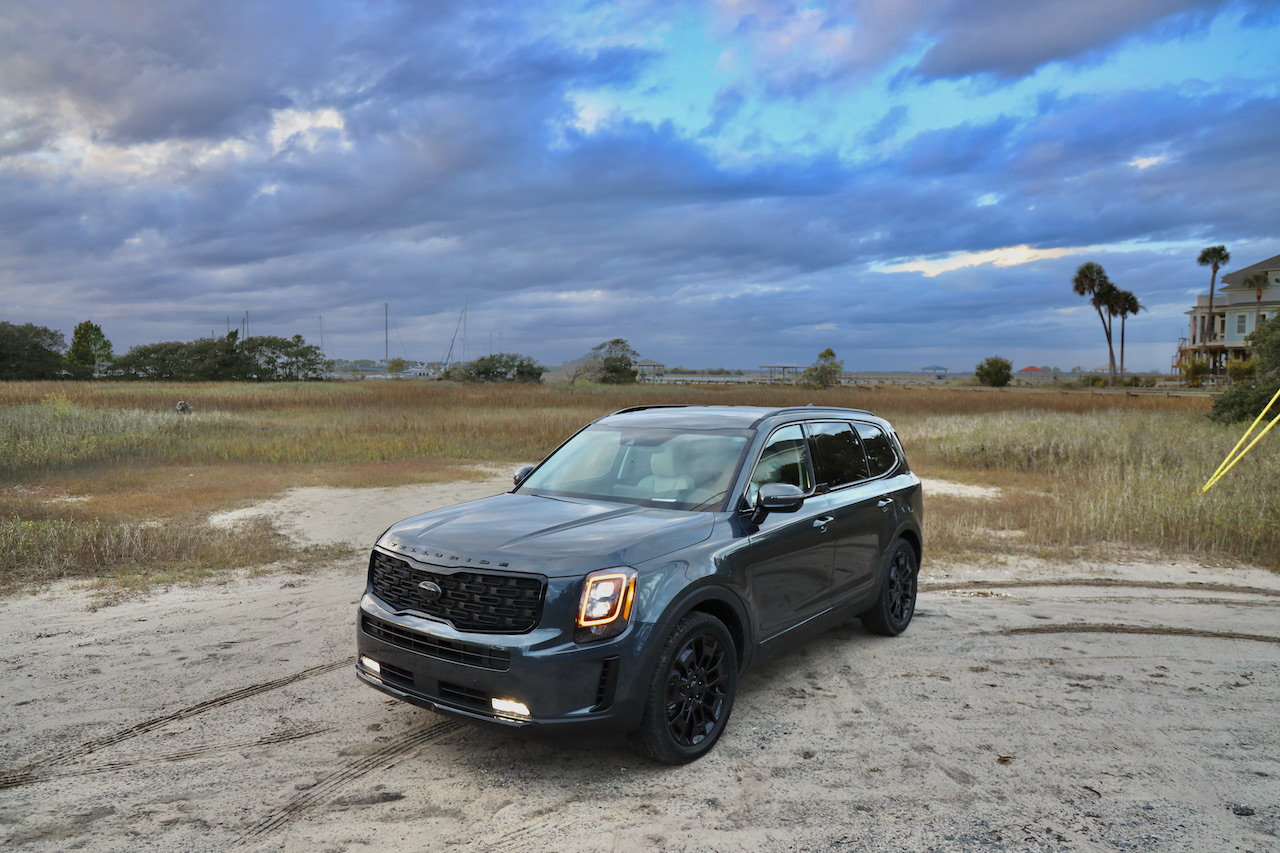 The fundamental flaw of automotive journalism is that most of the time it’s entirely aspirational. No journalist is going to buy the Lamborghini they drove at the press junket, or the Maserati they had on loan for a long weekend. We get to write about our automotive trysts without any thought of commitment, and that inevitably affects the reviews. But when you’re reviewing a car that you might actually buy for yourself, the price connects to real money in your head and you think about how you’d feel driving it every day.

The Kia Telluride is one such car for me. With an MSRP of about $50,000, the flagship model I tested is no budget ride, but it’s still far more approachable than an Italian rocket ship I might write about for a men’s magazine. And after driving the Nightfall Edition Telluride for a few weeks, I want it to be my next car. This may be easier said than done, given persistent rumors that they can sell for over MSRP due to their popularity. The company even refers to the SUV internally as the “Sell-U-Ride” for the fact that they sell like hotcakes. But it’s a great car if you can get one. 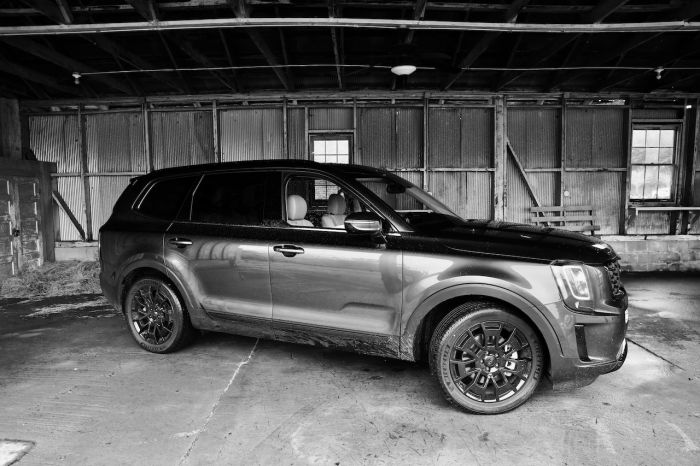 I have always liked the styling of the Telluride, but any time I saw one on the road, I always had the same thought, “That would be perfect if it didn’t have so much logo going on.” Telluride is a long word, and it lives on the front and back of the SUV in a rather big font. Seeing Tellurides in the wild always led to the same conversation with my wife: “If we ever got one, we’d have to take off those letters.”

And then I saw the Nightfall Edition pull up in front of my house, and all superficial concerns instantly vanished. The Nightfall Edition, new for 2021, includes blacked-out Kia badges, and the T E L L U R I D E spreading across the hood and liftgate are also blacked out. With the charcoal grey model I tested, the letters look more like shadows or textural details rather than overbearing headlines. Add to that the black trim, black front grille, and the 20-inch black aluminum-alloy wheels, and for the $1,295 that the Nightfall package adds, I wouldn’t buy this without it. I would probably even cut corners on more substantive features to get it if I had to. It simply transforms the look of the Telluride from something great into something that wows you every time you look at it. 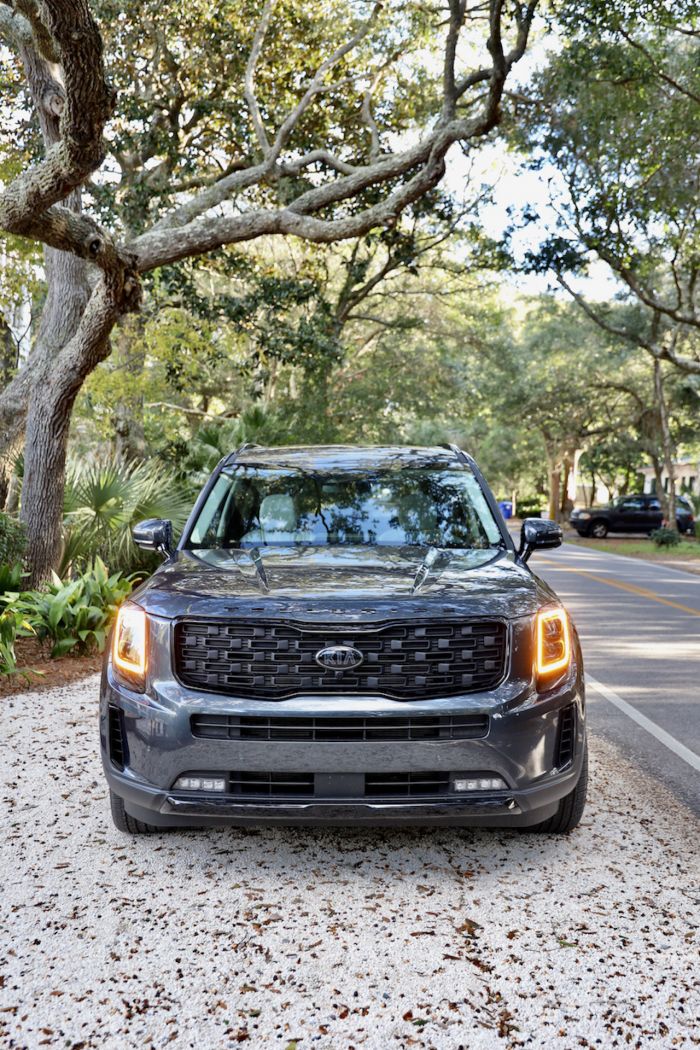 Another visual feature that I have to single out my affection for are the square headlights, and in particular, the always-on orange running lights around the headlights. The shape is simultaneously rugged and futuristic, and it’s mirrored in the shape of the dual-exhausts. Other exterior details I loved were the scooped front doors, and the metallic window trims the color of hematite crystal. Taken as a whole, the shape of the Telluride reminds me of a Range Rover. There are no angles here that would remind you of a minivan, as can happen with three-row crossovers. 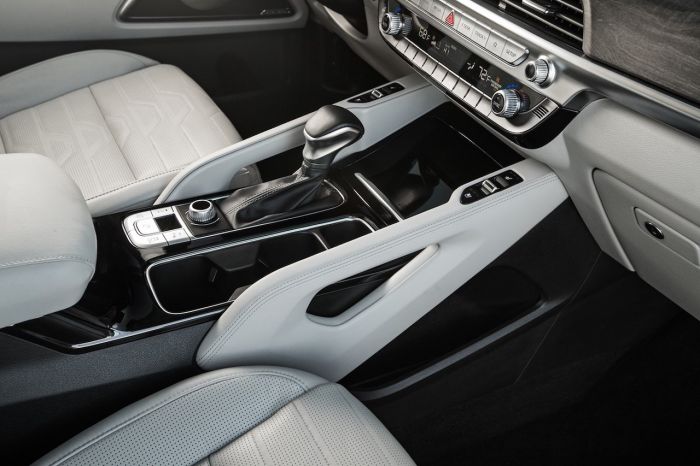 The cockpit is luxurious without being too soft. There’s a modern edge to its grey wood trim, stone-colored Nappa leather seats with vertebrae-like stitching, and the metal trim, buttons, and hardware. The leather-wrapped steering wheel feels both luxurious and substantial, as does the leather and metal shift knob. The metal gas and brake pedals add a sporty touch, and the blue lighting that traces the interior door lines, which could bring to mind the rubber rope lights of a Vegas limo, is instead Tron-like and cool. The Harman Kardon sound system seemed powerful enough to rock a block party. These are some of the details that will stay with me.

The middle row pops down with the touch of a button and the cargo space is generous. I had it over the holidays, and I fit two guitars, a bicycle, a Christmas tree, and luggage for four in the back with room left over. The dual-sunroofs keep the interior bright and airy, and though the rear sunroof doesn’t open, it wards off claustrophobia for passengers in the third row. And speaking of the third row, it’s plenty big for people with knees. 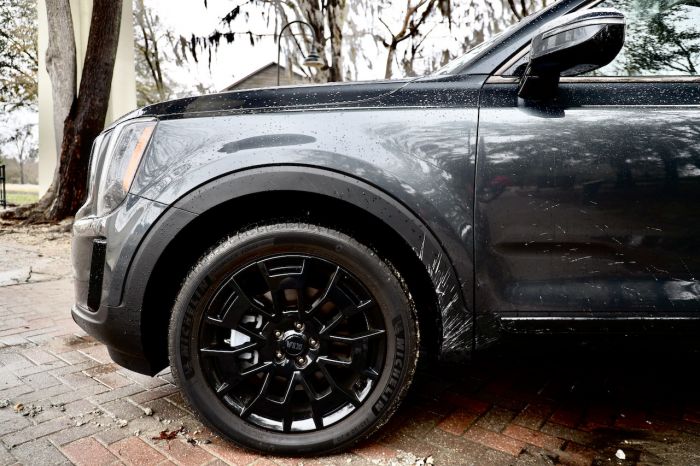 My only minor gripes with the Telluride are superficial. The touchscreen is an elegant and panoramic dashboard centerpiece, but I found the software interface to be a little fiddly. As someone tasked with frequently learning new infotainment systems, this one just felt a little less intuitive than most. Switching between modes, I somehow always kept getting sent back to a menu of ambient meditative sounds, namely a crackling fireplace.

The “premium cloth headliner,” part of the SX Prestige package, has a suede-like texture, so touching it leaves a temporary mark in the fibers. It’s a plush fabric to touch, but the texture almost made it look like it needed cleaning. Also, don’t expect to get your Venti latte cup in the door cupholders, as they are quite slim.

Finally, and this was perhaps the only quibble that I kept being reminded of after I forgot about the headliner and got the hang of the media system: the key fob, to me, isn’t up to the standard of the rest of the car. Functionally, I appreciated the off-angle lock button, so I could find it easily and blindly in my pocket. But the texture of the plastic fob body was the only surface I touched related to the Telluride that didn’t feel quite premium. 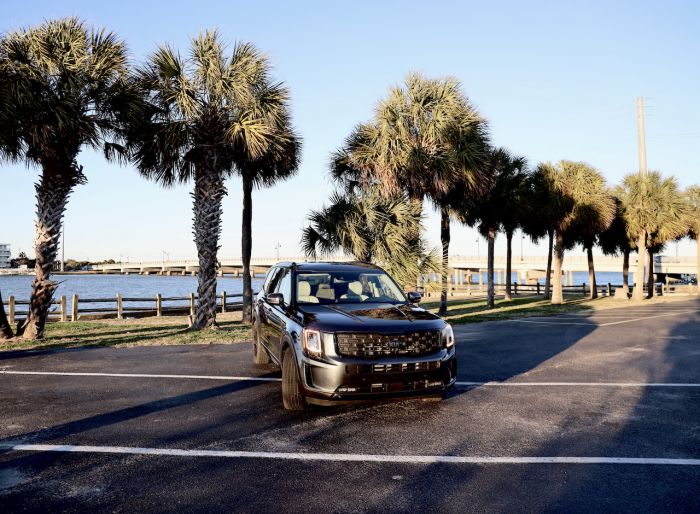 I’ve read in other reviews that the performance of the Telluride’s V6 engine was bland, but I never felt that way at all. There are four driving modes: Sport, Eco, Comfort, and Snow. I used Eco or Comfort when going long distances, and averaged about 25-26mpg. I was surprised how much the personality of the Telluride changed in Sport mode, which spoiled me with power for changing lanes or merging onto the freeway. Eco prioritizes gas mileage, Comfort is a happy medium, and Snow, unfortunately, I didn’t get a chance to try in a South Carolina winter.

It is a large vehicle, but it doesn’t drive like it. Occasionally while backing into a parking spot, I became aware of the size, but the overhead camera angle gives you a top-down view of your surroundings so you won’t take out your neighbor’s recycling bin. And any time you signal a turn, a turning camera appears on the digital dash that gives you a view of the curb and your wheel to make sure you don’t nick the gorgeous black Nightfall rims. 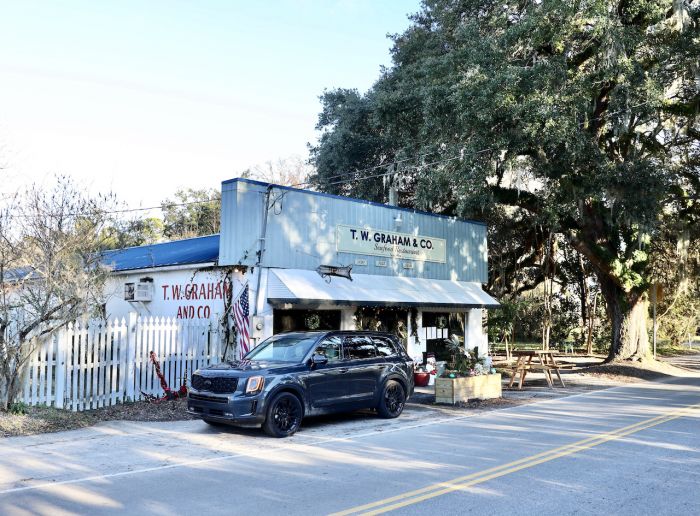 The steering and suspension felt a little floaty at times, but when I took it on unpaved roads in the South Carolina tidal marshland, it glided over the rutted dirt so smoothly I could’ve sipped from a teacup without spilling.

I need to give a special mention to the Head’s Up Display, which keeps your eyes on the road and delivers just enough information as you need it, but never so much that it becomes distracting. I also really liked the warning rumble in the steering wheel, which reminded me of a video game controller. It was very effective at getting my attention, and I much prefer this to a shrill beep. The lane-assist while driving in cruise control was assertive and comforting, and wouldn’t let you ever drift into the rumble strips on a long drive.

The fact that after three weeks of driving it every day, my only complaint is with the key fob, I’d say that speaks pretty highly of the Telluride. I now understand why it’s so popular, and why the newly redesigned Sorento so closely resembles it. It’s practical for a road trip or daily carpooling, it’s fun for a solo errand in sport mode with the stereo blasting, and aesthetically, it rivals far more expensive SUVs. And I can see myself still enjoying it years down the road.

Kia has just unveiled a new and much-improved logo, and the new badge is a better match for how good their vehicles have gotten. And the next time I’m in the market for a new car, I will start my search, and quite possibly end it, with a Telluride. 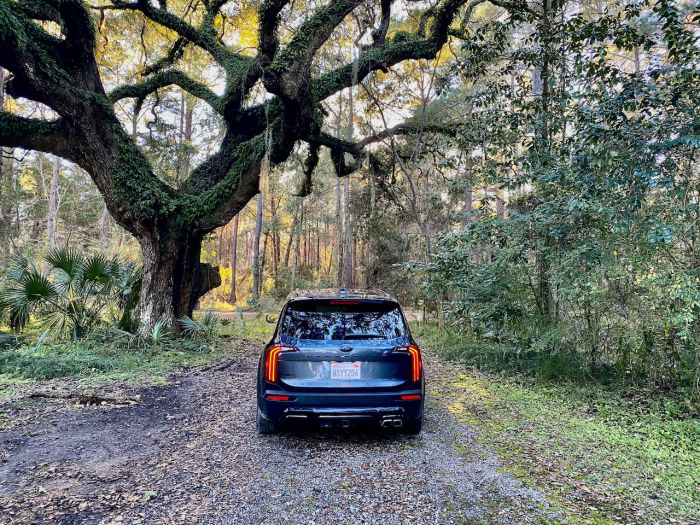 Beets and creamy goat cheese salad with crunchy, sweet pecans with a honey balsamic vinaigrette is like a symphony in